Weather or not, at Smith

Last week’s heavy snowfall took a toll on a number of trees on the Smith campus.  This week we hear the constant grinding of the wood chipper as limbs are removed and paths are cleared.   The storm wasn’t the first to wreck havoc on campus or in town:

“Dear Father–…We are having one of the worst snow storms, in fact THE worst that I ever remember and Edith and I had the pleasure of walking home in it this noon.  We did not realize until we came to go out to dinner how the wind had increased in violence since this morning, nor how deep the snow was.  All I know is that we found ourselves out in a white blinding whirl of snow with no paths to walk in and a wind that took away our breath…One of two girls just in front of us lost her rubber in the snow and fell down and could not get up till a boy ran up and helped her…” [March 12, 1888, unidentified Smith student to her father]

Main Street, Northampton, during the Blizzard of March 1888

While the snow last week did not pile up to the height of the snow seen above, trees were the primary victims on campus.   When the Hurricane of 1938 swept through campus, the trees were especially hard hit. 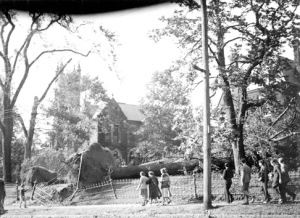 Scenes like this one along Elm Street were replicated on all sides of the campus.

In front of Sage Hall, September 1938

Below, trees obscure the front of Sage Hall and block the side entrance to the College along Green Street.

Side campus to campus next to Lilly Hall

As I look outside I see a stack of wood from the American Beech tree that was split in half near the Lanning Fountain.  A large toppled pine tree rests in the waters of Paradise Pond blocking the walking path near the Tea Hut.

There are signs of spring around.  The crocus are blooming in the Botanic Garden and the Bulb Show begins at the end of the week.  We enjoy the sunshine as we get ready for “mud season” but know in our hearts that the weather will change in a minute and the storms of winter may not be over quite yet.

Comments about the weather can be found in numerous sources in the College Archives including student letters, journals and diaries, as well as published sources.  The images for this posting came from files in the Northampton & Local History Collection.  Come and explore what the College Archives has to offer!

Christmas card created by College Archivist Margaret Grierson in 1965 with an undated photo of College Hall in the snow.

In 1940 Margaret Grierson became the second archivist in Smith College history. Grierson was an all-around Smithie: receiving her A.B. from Smith in 1922; joining the Department of Philosophy from 1930 to 1936; and finally, holding down three positions simultaneously in the Library (College Archivist, Executive Director of the Friends of the Smith College Library, and Director of the Sophia Smith Collection) until her retirement in 1965.

Grierson, who died in 1997, is remembered for many things at the College, but especially for her wonderful gift for letter writing. Folders and folders of her correspondence can be found in her papers here in the Archives. And Christmas-time was no exception. Each December Grierson sent out a photo card or postcard from the College Archives to alumnae, friends, and donors. END_OF_DOCUMENT_TOKEN_TO_BE_REPLACED

Winter time at a New England educational institution can be bucolic, bustling, bristling, or simply plain brrrrr-y.   Smith women take the winter in stride.  Sometimes its worth reporting how.  Cabin-fever must have gotten to the women in 1891.  A famous ‘snowball fight’ took place at the end of January and was reported in the National Police Gazette as a battle between the “Sophies and the Freshies.”

Clara M. Greenough, a member of the Class of 1894 recalled the snowball fight where ready-made snowballs froze the night before and ‘…became cannon balls” and were used by the Sophomores ‘…to unpleasant effect…The air was filled with taunts and screams and squeals’ until the battlefield was surrounded not only by students, but by faculty and townspeople, curious about the ruckus.  After the battle was over, the sophomores were victorious.  When this woodcut was published, Grace Landen (Rickey), Class of 1893, noted that  someone [President Seelye], put his foot down and “this was the end of snowball fights” at Smith.

Smith women take to winter in less competitive ways as well.  This photograph is of the 1906 snowshoeing club, as they clomp around Paradise Pond.  Remember, these are the days of cat-gut and wooden snow shoes.  Some folks still use them!

Snowshoeing continues to be a popular winter sport here in New England.  These young women were out in the skirts and shoes in 1895:

Skating on Paradise Pond is also a great way to enjoy the outdoors. Just the other week when frigid artic temperatures hit Northampton, a cleared space appeared on the Pond, and all would-be NHL All-Stars, Olympic figure skaters, and their families were out on the ice.

Skaters on Paradise Pond in 1888

Smith women are creative in the ways they fight cabin fever.  Not everyone embraces the outdoors, but they can find pleasure in creating snow sculpture, and snow angels; in drinking lots of hot tea and hot chocolate, as well as making plans to head to someplace warm for March break!

May you find the perfect way to relieve cabin fever this winter.  Just remember Puxatawney Phil says there’s 6 more weeks of it to come!